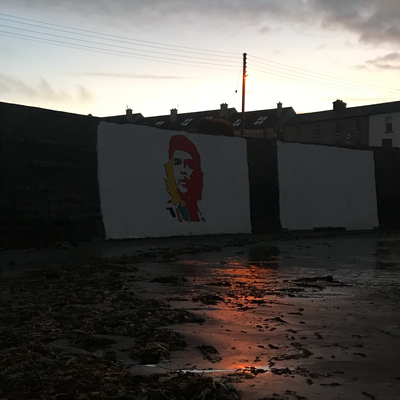 Any idea how Che Guevara is related to Ireland
and why a supersized portrait of him is on the beach walls in Kilkee, county Clare?

Read below and you‘ll be surprised to find out !

I knew the story before getting here and absolutely wanted
to take a picture myself and share the story with you.

The following text was written by Richard Fitzpatrick and published by the ,irish examiner, on Sept. 26, 2014.

Jim Fitzpatrick met Che Guevara in the Royal Marine Hotel bar in Kilkee, Co Clare, in the summer of 1961. Fitzpatrick was 16 years old at the time, and had travelled down to the seaside village to work in the hotel while on holidays from Gormanstown College, Co Meath. The hotel’s owners set up a mattress in a barn for him to sleep on for his first couple of nights’ stay. He was put working behind the bar.

“I was an instant barman — no experience whatsoever,” he says. “I wouldn’t mind, but I was a pioneer, totally opposed to drink and still am.” It was after Mass one morning, while Fitzpatrick was working in the bar, that the encounter happened.

“It was a beautiful sunny morning. I was working in the bar on my own. There was a guy there called Sam, who was in there every day, a lovely man. I was chatting away to him. There were two other people in the bar, regulars. And in walked these three, very interesting looking men. All that was needed was Clint Eastwood saloon doors because they came into the bar through swing doors at the side entrance to the hotel.

“They had green-coloured, London Fog raincoats with epaulettes. I recognised him immediately. Who the other two guys were was a mystery. One guy was very curly-haired. I said something like, ‘What brings you here?’ He laughed. And I said, ‘I recognise you. I follow the Cuban revolution.’

“The Cuban revolution was probably the most exciting thing that ever happened. For me, he was a world figure. We watched Pathé News and all the revolutionaries coming into Havana, sitting on top of tanks with their long hair and beards. He would have been as famous as Maradona today. People of my age idolised him.

“We talked for a few minutes once he realised that I knew who he was. His English was faltering, but he could make himself understood. The first thing he said was, ‘You know I’m Irish. My father was Guevara Lynch.’ I was taken aback by that because I didn’t know that at all.”

Guevara’s Irish roots stretch back to the Lynchs of Galway, one of the county’s 14 tribes. He was a descendant of Patrick Lynch, who left Galway in the mid-1700s and became a substantial landowner in Argentina’s Rio de la Plata region.

Jon Lee Anderson, who spent five years writing Guevara’s biography, says: “He was first and foremost a Latin American but I think his Irish roots were important to him. His father was very much a Lynch of Galway and knew the family history. That part of the family had done extremely well in Latin America.

“On both sides of the family, he had pretty illustrious ancestors. Part of the family folklore is that a great great-aunt may have been Eliza Lynch, the mistress of Francisco Solano López in Paraguay who in the late 19th century declared war on Brazil, Argentina and Uruguay and devastated the country, from which it never recovered.

“Che read his James Joyce. When he was a young lad he began keeping a philosophical dictionary. He didn’t write or speak much about the Irish rebellion, but it’s my understanding that he was certainly aware of it, and aware of the idea of the Irish rebel, which appealed to him very much.

“His father definitely had a little bit of the bard in him. He was a great spinner of tall tales. There was always a recognition in Che of that, and the difference between his mother and father — his mother being very much of Spanish blood, and of his father as a Lynch and the connection with the old country.”

Back in Kilkee, Guevara asked Fitzpatrick for a suggestion as to what to drink. “Obviously in Cuba, they drink rum, and I suggested rum. But he said, ‘No.’ He wanted an Irish drink. I recommended a whiskey. I said, ‘If you’re not used to it, I wouldn’t drink that quick. You need to put a mixer in it.’ He asked me what mixer and I said, ‘ginger ale or water.’ He took a glass of water, a glass of Power’s whiskey and he sipped it.

“I asked him what he was doing. He was on a Aeroflot flight — from Moscow to Havana or Havana to Moscow; I don’t think I was told — that got fogbound in Shannon. They wanted to see the coast. They hired a driver, and it was one of those old Ford Prefects — it wasn’t a flash car. They parked it outside. He said he was proud of his Irish ancestors; that the Irish brought down the British Empire. He sat down in a corner, chatting with his friends. They just had minerals.

“When it was announced he had been murdered in 1967, the next day his father was quoted in the Evening Press — I have the paper — as saying, ‘The blood of the Irish revolutionary ran in my sons’ veins’.”

Students and celebrities — such as Johnny Depp and Prince Harry — love to wear T-shirts adorned with Che Guevara’s image, while Mike Tyson and Diego Maradona have prominent tattoos of him on their bodies. He is a contentious figure, however.

When a Labour Party councillor, Billy Cameron, mooted the idea in 2012 of erecting a statue to the Marxist revolutionary in Galway, he was criticised by Declan Ganley, among others. The businessman and political activist described Guevara as a “mass murderer” and said the monument “would shame the people of Galway and Ireland”.

Jon Lee Anderson, Guevara’s biographer, disputes the charge that Guevara was a mass murderer, and explains his appeal: “Che’s face, extrapolated from that famous 1960 Alberto Korda photograph, which showed him at his height, his almost mystical anger and indignation. He had long hair, the very image of a rebel, angry, looking off to the far horizon. Already, he is a figure of legendary repute, as the guy who was backing the insurgencies that began to pop up everywhere. It became the defining image of an age.

He represents youthful rebellion and defiance of the status quo. That’s why it’s a universal image. By holding up his face, you’re sticking it to the man.”

The text above was written by Richard Fitzpatrick and published by the ,irish examiner, on Sept. 26, 2014.


About the famous Che Guevara Poster,  Jim Fitzpatrick writes on his homepage :

and it led me to create this now world-famous image.